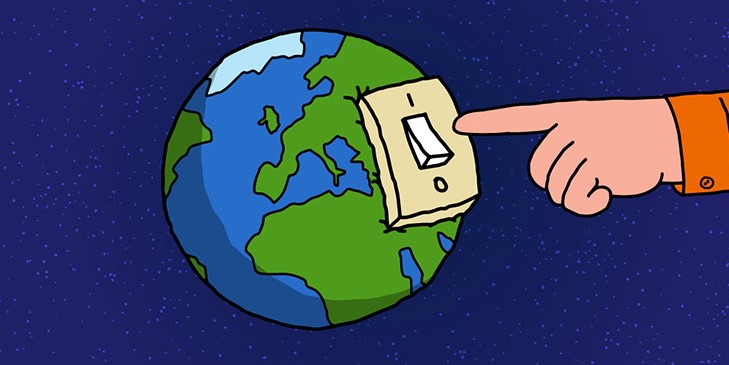 Switch Off the Lights for Earth Hour – Save Our World

When it comes to environmental awareness, some initiatives have come forward to help people participate in raising awareness globally. One of these initiatives is Earth Hour. In this article, I present to you the history of the Earth Hour, the concept behind it, and provide a few ideas of how to participate and help disseminate activities within the Earth Hour, which occurs between 8:30 pm and 9:30 pm on the last Saturday of March.

Why do we have the Earth Hour Campaign?

The Earth Hour event started off as an idea that was hatched by WWF Australia in 2004. WWF Australia and representatives from Leo Burnett in Sydney, an advertising agency, sat down and discussed ways to impress on Australian minds the awareness for climate change. It wasn’t until 2006 that they came up with the idea for what they called “The Big Flick” in which everyone across Australia would turn off their lights at the same time. To get the event sponsored, WWF Australia went to Clover Moore, then Sydney’s Lord Mayor and the Fairfax media group. In 2007, after receiving backing, that held the world’s first Earth Hour event on March 31st, 2007 in Sydney at 7:30 pm.

Inspired by the events that took place in Sydney, the City of San Francisco in the United States held its first Earth Hour in October 2007 and the organizers decided to join Earth Hour Sydney for a 2008 joint event.

After 2008 the Earth Hour caught more and more media attention leading to global awareness of the program, thus led to a global event that is now held all over the world. WWF is now the official world sponsor of the event and it has led to many alternatives, spin-offs, and other climate and environmental awareness initiatives.

One of the ways to assure funding for the Earth hour is provided through online crowd-funding, and millions of concerned citizens of the world donate annually to fuel the event.

Some of the alternative events that have arisen from the Earth Hour include the planting of half a million trees in Uganda as a protest against global deforestation. In Russia, there is an initiative to pass a government bill to protect Russian coastlines from oil pollution.

The Meaning of the Earth Hour

Earth Hour is one hour when people turn off the lights, essentially saving electricity and lowering the carbon output through minimum power usage. Today over 7,000 cities in 187 countries participate in the Earth Hour. The meaning is that we, as people, and we as governments, understand the need to combat waste, fight pollution and work together to save our planet.

Earth hour is not about saving energy or stopping pollution, it is a symbolic event designed to bring about awareness so that the world may start to retrospect their actions and how their energy consumption and waste harm the environment and their own living conditions.

What can you do for Earth Hour?

There are a number of actions you can take to participate in Earth Hour; obviously, the first one, and possibly the easiest is to donate a small amount through a crowd share initiative or directly to the WWF. Other methods obviously include turning off your light. When Earth Hour is initiated, join in and turn off your lights, and try to convince others to join in too.

Another initiative you can take is to arrange family activities and place them on social media to show everyone how much fun you can have when not wasting energy. These family activities can include taking your family and friends for an hour walk, just enjoying the outside. Or perhaps organize a group activity in the countryside or in your neighborhood. Other activities might include retrograding to candles and enjoying a family dinner in the candlelight, reminiscent of the years before electricity.

On a more active note, you might consider taking up photography during the Earth Hour and take photos of your surroundings to see how Earth Hour affects your environment.

For the more spiritual participants, yoga and meditation activities are coordinated all over the world, and you could easily find and join one such activity. Take in the quiet, enjoy the dark silence and meditate a world without noise and light pollution.

Finally, for the more relaxed among us, after long hours of work, just take a nap for an hour, let the quiet smother your senses and float you into a dream world.

While we cannot state how Earth Hour has impacted the global psyche, a study performed in 2014 showed that a reduction of 4% was recorded in the global electricity consumption. This figure is astounding when you consider that it represents only a fraction of the world population participation in the event. Consider how much electricity could be saved if everyone in the world shut off electricity for an hour once a week.

Earth Hour was initiated to raise awareness about climate change in general. The concept was to find a way to bring about awareness to all the different kinds of pollution that surround us. Consider noise, the myriad sources of loud noises from phones, TV’s, music sources. Light pollution from the same appliances but add room lights, advertising lights, neon signs and more, add to this the carbon footprint that all these pollution sources generate due to their energy sources and understand how 1 hour a year can be extrapolated into being longer. Earth Hour is about release from the modern industrial environment, it’s about closing your cell phones, your lights, your appliances and just enjoying mother nature in its raw and beautiful magnificence.